Today is February 1, 2021, which means we can now take a look back and see which phones made the top-selling used phones list for the previous month, January 2021. This latest report carries on the tradition of seeing the list dominated by the iPhone. In January 2021, nine of the top ten models were an iPhone. The sole Android smartphone that made the list was the Galaxy S9, which interestingly, climbed from number nine in December 2020 to number two in January 2021.

Looking at the January 2021 top-selling list as compared to the December 2020 top-selling list, and we see prices have dropped a little for each of the models. The Apple iPhone lineup tends to hold the value, and in general, offers a higher resale value as compared to Android smartphones, but over-time prices are expected to decrease. Basically, that is to say, that right now is always the best time to sell when it comes to smartphones. 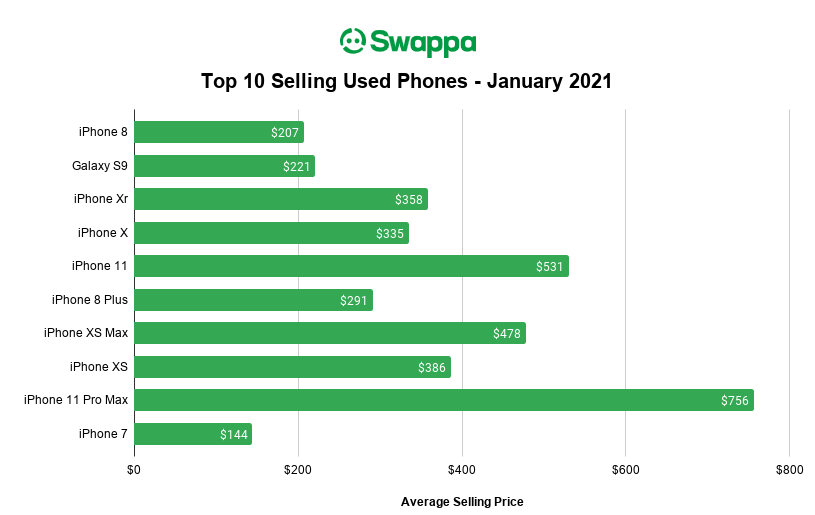 It is always fun to look back and see which phones make the top-selling list each month. But putting the fun aspect to the side, this list will also be helpful to sellers and buyers. The list will allow sellers to see which models are in the highest demand. The list will also allow buyers to get an estimate in terms of what they can expect to pay for any of these models.

Any site can claim to be safe and secure and to have happy users — but Swappa can back that claim with a Trustpilot rating of Excellent that comes courtesy of over 11,800 independent user reviews.