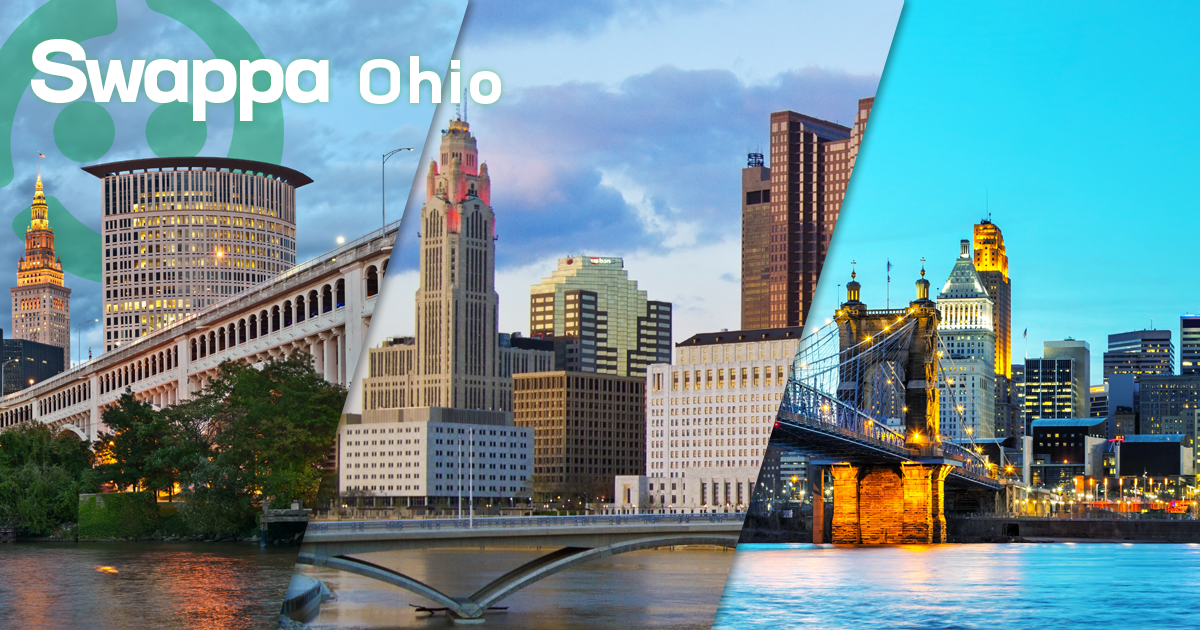 It’s been a busy summer here at Swappa HQ. Over the last few months we’ve been working hard to launch Swappa Local — our all new local buying option — in new cities across the country. From Los Angeles to New York, and 3 major cities in Florida, Swappa Local is the safest way to shop for the best tech deals in your neighborhood. And we’re still trucking.

For the next stop in Swappa Local’s nationwide tour, we’re now ready to make our big introduction in Ohio, launching in three new markets across The Buckeye State. That’s right. Today we’re officially inviting Ohio residents in Columbus, Cleveland / Akron, and Cincinnati to come experience a better way of buying and selling used tech in their local communities.

Before Swappa Local, buying and selling used tech in Ohio had too many risks involved. While services like Facebook and Craigslist are great for selling old baby cribs and coffee tables, they aren’t exactly known for their safety, especially when it comes to used phones for sale.

It may not be common knowledge, but smartphones have a serial number attached to each device that leaves the factory. When a phone has been reported lost or stolen, wireless carriers will put the device on a universal blocklist that prevents it from being activated with a new carrier. This is how scammers take advantage of good people looking for an honest deal, as a blocklisted device often times isn’t discovered until it’s too late.

Fortunately for all of our friends in Ohio, Swappa Local’s marketplace is much different…

Swappa has been around since 2010, offering a safer alternative to Craigslist, Facebook Marketplace and other garage sale apps. On Swappa, sellers are required to adhere to our strict ‘no junk’ policy which requires all devices be fully functional and ready for activation. Swappa staff also manually approves each device before the listing goes live in our marketplace, as well as performing checks on used phones to ensure they haven’t been reported lost, stolen, and aren’t still being financed.

Other online marketplaces more closely resemble device junkyards, filled with broken or iCloud locked devices that are sold by completely anonymous (and sometimes even fraudulent) users. This is because they offer little-to-no moderation and do virtually nothing to actually verify listings and make sure a listing is legitimate.

While competing services have become breeding grounds for fraud and scammers, Swappa Local allows buyers to trust the tech they’re buying. Simply put, Swappa Local is a safer marketplace, one that isn’t plagued with non-functional or iCloud-locked devices. Our marketplace is actively monitored by our support staff 24 hours a day, 7 days a week. When we’re not manually verifying listings, our support team is answering questions, resolving issues, and verifying the status of every phone sold in our marketplace. This makes Swappa Local the best — and most logical — choice for buying and selling used tech in your local community.

As you can see, there are plenty of reasons to buy your next device on Swappa Local. For more on how Swappa Local stacks up against the other guys, check out our more detailed post comparing Swappa vs OfferUp vs Letgo.

The best way to buy & sell used phones in Ohio

Home to over 1.5 million people, Swappa’s online-only marketplace already sees a significant number of transactions taking place in Columbus, Cleveland, and Cincinnati. The next move was to introduce a safer local marketplace option for our users already using Swappa in Ohio, while welcoming new users in search of the best tech deals near them.

Whether you’re looking for a cheap iPhone in Franklin County, a Samsung Galaxy in Fairfield County, an Apple Watch in Delaware County, a MacBook Pro in Cuyahoga County, or a DSLR camera in Hamilton County — you’ll find the lowest prices when buying them gently used on Swappa.

At Swappa, we don’t believe anyone should be forced to pay full retail on a new iPhone, Google Pixel, MacBook, Chromebook or any other piece of consumer tech. Whether you’re looking to save money on a new purchase — or make some extra cash by selling stuff you’re no longer using — the Swappa Local is a great way to both save and make money.

We know there are other services out there for buying and selling used tech, but we firmly believe none are as safe or reliable as Swappa. So don’t risk your hard-earned money buying a sketchy cell phone on Craigslist, Facebook, or garage sale apps. With Swappa Local, you can trust the tech you buy.