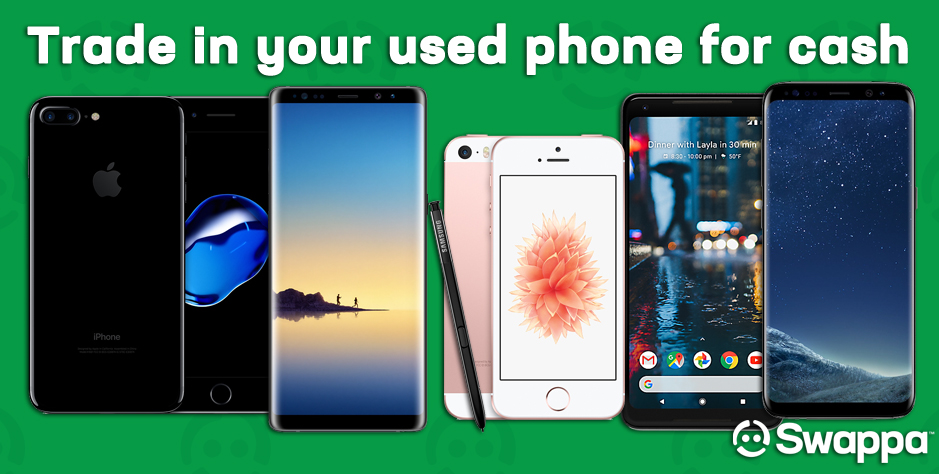 Whether you’re upgrading to a newer phone or you just want to make some extra cash, you may be considering selling your iPhone or Android to a cell phone trade-in or buyback program. Getting rid of your old device not only helps you declutter, but you can also make a good amount of cash if you play your cards right. Selling your old phone is also great for the environment, since you are extending its useful lifespan and preventing it from ending up in a landfill.

Today, we’re taking a closer look at cell phone buyback, trade-in, and recycling programs to see how you can get the most cash for your used iPhone or Android phone.

Can I trade in my cell phone?

Yes, you can actually trade in your cell phone — either online or in person at a retail store near you. Trade-in programs are a safe and relatively easy way to sell your used iPhone or Android phone.

There are several options for cell phone trade-in such as Apple’s Trade-In Program, Decluttr, Gazelle, and Amazon. They all work in a very similar way: You fill out a form — either in person or online. Then, you’re given a quote for how much they think your used phone is worth. If you accept their offer, they’ll pay you for your used phone, usually in the form of a store gift card. If you’re using an online trade-in service, payment typically comes a week or two after your device has been reviewed.

How to trade in a phone

Cell phone trade-in isn’t terribly difficult, and that’s why many people are drawn in. But there are a few pitfalls and a bunch of fine print to be aware of. Here’s how you can trade in your used phone:

How to prepare a phone for trade-in

The first thing to prepare a phone for trade-in is to back up and clear your device. Instructions for this vary, depending on whether you want to reset an iPhone or reset an Android phone. Not only does backing up and clearing your phone make sure that you don’t permanently lose any important data, but it also keeps your personal information… personal.

After resetting your phone, you have to thoroughly inspect it and assess its condition. Most trade-in programs use an online questionnaire that asks whether your phone has any damage such as scratches or a cracked screen, if it’s unlocked, whether it’s fully paid off, and if it’s tied to any specific Apple or Google accounts.

Those with damaged phones may be wondering if you can trade in a phone with a cracked screen. Unfortunately, most trade-in services simply do not take broken phones. However, a cracked screen doesn’t mean that you can’t get money for your used device. Your best bet is to find a local repair shop near you and then figure out the best place to sell it the most money.

Find out how much your used phone is worth

After filling out the online or in-person questionnaire, the trade-in shop will give you a quote for how much they feel your used Android or iPhone is worth. But brace yourself — trade-in programs are middlemen, meaning that it is in their best interest to give you as little as they can for your used phone. We’ve taken a closer look at this and found that you can usually make over twice as much by selling direct through Swappa! If you’re trading in your phone locally, you’ll usually be given a store gift card then and there. However, if you’re going through an online cell phone trade-in shop, it can often take as long as two weeks to get paid.

Should I trade in my used cell phone?

While trade-in programs are convenient and streamlined, they generally aren’t the best option for most people. Because you’re selling your used phone to a middleman whose goal is to turn around and sell it for a profit, trade-in services take a rather large cut of the profits. A better alternative is to sell your phone directly on Swappa. Not only can you make more than twice as much for the same phone, but you are paid in cash rather than a store gift card you may never use.

MORE CASH FOR YOUR USED PHONE

Will my carrier buy my phone back?

Cell phone buyback programs are nearly identical to trade-in programs. The only difference is that in a buyback program, the store that originally sold you the phone is the one that buys it back — and that’s usually your wireless carrier.

Since a phone buy back program is essentially a trade-in program run by your carrier, most of the same pros and cons apply. Cell phone buyback programs are a safe and relatively easy way to get rid of your used phone. But just like with trade-in programs, a buyback will get less than half as much as you would by selling direct. And when you do get paid, it’ll be in the form of store credit that you’ll be forced to spend with your existing carrier. So if you were hoping to switch carriers and enjoy the freedom of an unlocked phone, you can kiss those dreams goodbye.

Is a cell phone buyback program worth it?

Just like with trade-in programs, cell phone buyback sounds nice at first, but it really doesn’t hold up well when digging deeper. You’d be better served by selling your phone on Swappa and making over twice as much. And while you’re at it, you can use those proceeds to fund the purchase of an unlocked replacement phone, giving you freedom to pick the best carriers and phone plans for you!

GET THE MOST FOR YOUR USED PHONE

Next, we have cell phone recycling. Quite a few places that offer used tech recycling, so you’ll almost always find cell phone recycling near you. However, be aware that most places claiming to offer cell phone recycling are actually trade-in programs in disguise. These imposters are easy to spot, since they’re generally electronic kiosks that you see in the mall or at your local Walmart. These kiosks typically work by giving you a trivial amount of money for your used phone. Afterward, they refurbish and resell your device for profit — either to another person or to a retail partner.

What about actual recycling services like those offered by your local electronics retailer? These are often drop boxes where you can place your electronics to have them recycled free of charge. Rather than turn around and resell your used phone, these services actually safely dispose of your unwanted electronics. Generally, this means that the rare earth magnets and valuable metals like copper and gold are harvested from the phone. These components are then used down the line, in the production of new phones.

Unfortunately, you don’t get a dime when actually recycling your old phone. And due to the manufacturing processes required to create a new phone down the line using these recycled components, it’s much more eco-friendly to just find a new home for your working phone on Swappa.

Should I recycle my old phone?

While the idea of cell phone recycling sounds great at first, it quickly falls apart when you look a little closer. Whether we’re talking about a recycling kiosk that’s really a trade-in program in disguise or an actual recycling program at an electronics retailer, there are better options. Sell your used phone on Swappa instead, and get what you truly deserve. Not only will you make a lot more money, but it’s also better for the environment.

Sell your phone for more cash at Swappa

Swappa is a better way to sell — both online and in person. Unlike trade-in and buyback programs, Swappa directly connects buyers and sellers to cut out the middlemen. This means that you’ll always get fair market value for your used iPhone or Android phone. On average, you’ll make more than twice as much by selling on Swappa!

Unlike trade-in programs, sellers on Swappa get cash, not some store gift card you’ll never use. And since there aren’t any listing fees, all that cash stays right where it belongs: in your wallet. Swappa is safe, simple, and sure to get you the most for your used tech.

So what are you waiting for? Join the Swappa community and experience the best way to buy and sell used tech!

SELL FOR MORE ON SWAPPA