In this article, we’re going to discuss switching from T-Mobile to an MVNO carrier — with the intent of saving some money.

MVNO stands for Mobile Virtual Network Operator. An MVNO carrier leases network access from one of the major carriers, in this case, T-Mobile. With the MVNO carrier leasing network access in bulk, they are often able to offer discounted rates — which will allow you, the user, to spend less each month and still use the same network.

Coverage and roaming are two items that need some consideration when choosing an MVNO carrier. Network coverage in the areas where the carrier offers service is typically displayed on a carrier coverage map. The part you want to consider is what the carrier is showing on the coverage map.

Some carriers will include roaming areas alongside their own network coverage. This could make the carrier’s coverage appear greater. If you are a direct customer of the carrier you would have full access to these roaming areas, however, not all carrier roaming agreements carry over to all MVNO carriers. This could potentially mean a lack of coverage in some of the more rural locations.

The good news is that T-Mobile has a 4G LTE network that covers 99 percent of Americans. You can check coverage for your local area using the T-Mobile coverage map. 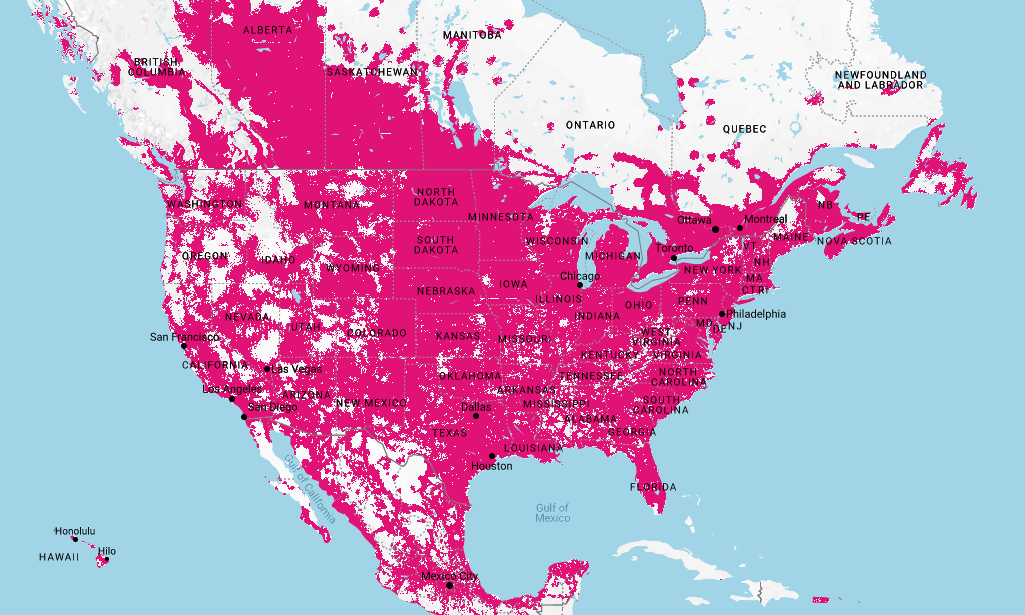 The online T-Mobile map not only shows you coverage in an overall area, but will allow you to narrow down and see specifics such as whether the 4G LTE is excellent, good, fair, or from a partner. To ensure the greatest compatibility with an MVNO carrier using the T-Mobile network — you will want to ensure you do not have “partner” coverage in the areas where you live, work, and play.

An independent report from Tutela noted that “across the board, MVNO customers see slower download speeds than subscribers on the host networks.” However, the slower speeds were not always as noticeable. The same report went on to mention that T-Mobile MVNO carriers “average download speeds are within 1 Mbps of the host network.”

Which MVNOs use T-Mobile

There are quite a few MVNO carriers that use the T-Mobile network. You could easily count 25 different carriers without going super in-depth, and we’ve recently covered some of the best T-Mobile MVNOs.

Our earlier list (seen above) of T-Mobile MVNOs focused on ten different carriers, and while we stand by that list as the best overall — today we are taking a look at the three carriers that are best in terms of saving money.

These three T-Mobile plans each include unlimited calls and text, and data, which we feel are the three key items users are looking for when it comes to wireless service. Having unlimited data is nice because it takes away some worry and allows you to just use your phone, however, we suspect lots of users would easily get by with a smaller fixed amount.

Today we’ll be taking a look at three MVNO carriers that have great plans that are cheaper as compared to T-Mobile. Up first is Mint Mobile, which offers service beginning as low as $15 per month.

Simple Mobile has five different plans available at this time, which range in price from $25 up to $60 per month. On the high-end you are looking at the same price as T-Mobile, so we’re going to remain focused on the three lowest priced of the Simple Mobile bunch. These three plans range from $25 to $40 per month.

These three plans also all include international texting, international calling (to 69 destinations), and international roaming (to 16 Latin American countries). Mobile Hotspot is also included with the Simple Mobile plans.

Bottom line, if you opted for the plan with 15GB of 4G LTE data you would be saving about $20 per month compared to going direct with T-Mobile.

US Mobile offers the ability to create your own custom plan, or go with an unlimited option — all of which should save you money compared to going direct with T-Mobile. As the unlimited plan closely matches the T-Mobile options — we’ll highlight the US Mobile unlimited plan.

Bottom line, this means a savings of $20 per month as compared to going direct with T-Mobile.

Switching to another carrier, even an MVNO is generally a simple process. Regardless of which carrier you are moving to, you will need to get a SIM card from the MVNO, choose a plan, and decide whether you want to port (bring) your current phone number or get a new phone number. You will also need to ensure you have a compatible phone.

Also important to note — each of these carriers ships a SIM card kit, which includes three different sized SIM cards to ensure compatibility with your phone.

The majority of carriers will allow you to transfer your current phone number when switching service. The exact steps may vary slightly from carrier to carrier, however, you would want to ensure you select the option to transfer during the initial setup/activation process.

With any carrier, you will need to have the account number and the corresponding PIN or passcode for the account/telephone number you are planning to transfer.

T-Mobile is a GSM network, which means that you will want to make sure your phone is compatible with GSM and that it is unlocked.

One perk of choosing an MVNO carrier is that you can bring your own phone. For some, this may mean using the phone you already have, but it can also mean purchasing a newish phone for use with the MVNO. Being able to shop for a newish phone means a potential savings of hundreds of dollars depending on the model you choose. You can browse for unlocked phones and T-Mobile compatible phones in the Swappa marketplace.