The Galaxy S20 lineup also saw a change in models. The Galaxy S10 lineup included the S10 and S10+, with a lower-price S10e. This year’s Galaxy S20 lineup dropped the “e” branded model and introduced the higher-end Ultra model. We’re taking a look at each of the new Galaxy S20 devices, and here in this post, we will be focusing on the Galaxy S20 Ultra.

Other details on the display include it being Quad HD + Dynamic AMOLED 2X Infinity-O display with a max resolution of 3200 x 1440. The S20 Ultra display also has a ppi of 511, is HDR10+ certified and has a 120Hz refresh rate. Similar to the other devices in the Galaxy S20 family, the S20 Ultra is also capable of running at 60Hz. This is an important distinction as the refresh rate will determine the maximum resolution. When the display is set at 120Hz the display resolution will top out at 1080. 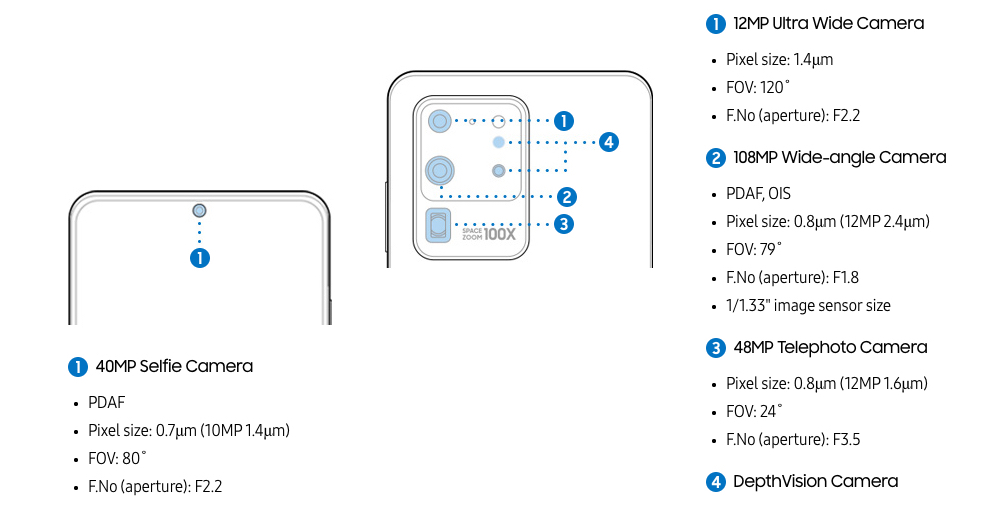 Looking at the Galaxy S20+ in comparison, and you would find a 10MP camera on the front, with a 12MP ultra-wide, 12MP wide-angle, and 64MP telephoto camera setup on the back. The Galaxy S20 Ultra is also able to record 8k video just like the S20+ and the S20. And because of the 108MP wide-angle camera — the Galaxy S20 Ultra does not have the same limitation when using the 8k Video Snap feature.

This feature basically allows the user to grab 33MP still images from their recorded 8k video. On the Galaxy S20 and S20+, the 8k recording is done using the 64MP telephoto lens, which means a narrower field of view. The 108MP lens on the Galaxy S20 Ultra means you will not default to the telephoto lens when recording 8k content.

Otherwise, some of the other key camera features can be found on the Galaxy S20 Ultra, which includes Space Zoom and Single Take mode.

Space Zoom: A new and improved zoom functionality found on Galaxy S20 devices. Samsung refers to this as being super-resolution zoom bolstered by AI, and promises that you can find shots you couldn’t find before. On the Galaxy S20+ Ultra, this means a 100x zoom. Samsung also includes a preview window in the corner of the camera that will allow you to see the bigger (unzoomed) picture.

It is also worth noting that while the Galaxy S20 Ultra has a 100x capable zoom, Samsung has promised no loss of quality with zooming up to 10x.

Some highlights that you’ll find with the Galaxy S20 Ultra include 5G support, a bigger battery, 45-watt capable Fast Charging, and the ability to have up to 1.5TB of storage space.

Beginning with the 5G support — this phone supports all current 5G options, to include support for mmWave networks. In comparison, the Galaxy S20 and S20+ also have 5G support, but they do not support mmWave 5G.

The battery can be described the same as the display size and the overall size — big. Samsung has loaded this phone with a 5000 mAh battery. Of course, while this may sound like a big battery, it may be needed in a phone that has a 6.9-inch display that is capable of running at 120Hz.

Higher amounts of storage is generally a welcomed addition with any newly released phone. The Galaxy S20 Ultra has internal storage options for 128GB or 512GB and that can be combined with up to an additional 1TB using a microSD card. And, with the 8k video recording — we think the extra storage may be welcomed in that it will keep you from regularly having to archive and backup, or having to simply delete files to clear storage.

The Galaxy S20 Ultra certainly looks like a powerhouse phone, at least based on the specs. The $1,3999.99 retail price may not be what everyone will consider affordable, so instead, you should consider buying newish and saving hundreds.