The Galaxy S10e brings much of the same in terms of the quality and the features from the S10 and S10+, however, the S10e is smaller in size, and perhaps more important for some, it has a lower price point. Of course, that is not to say the S10e is the same — there are some noticeable differences beginning with the smaller and flatter display. First though, let us cover the color options, review the hardware specs, and then get into the camera setup.

The color lineup for the Galaxy S10e is one place where the device is similar to the Galaxy S10. The S10e is available in the same four color options found on the S10; Prism White, Prism Black, Prism Blue, and Flamingo Pink.

The Samsung Galaxy S10e began shipping in March 2019 with Android 9 Pie and the Samsung One UI. Samsung began rolling out the Android 10 (and One UI 2.0) update in November 2019. 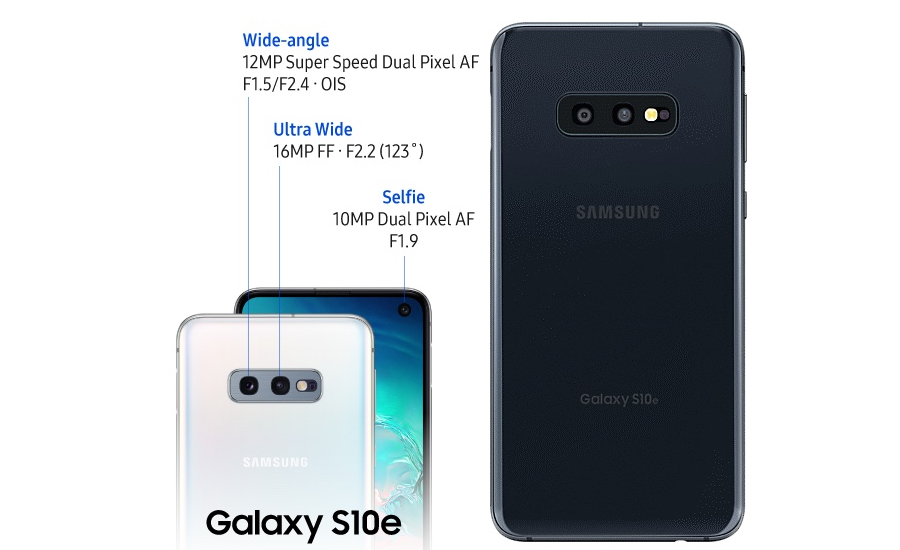 To begin with, the S10e is a little smaller in terms of height. Another factor is the display, and how some may simply prefer the flatter non-curved display found on the S10e. Depending on personal preference, some may also prefer the fingerprint sensor being in the power button, as opposed to the in-screen fingerprint sensor from the S10 and S10+.

Shifting back to the lower price of the S10e coming at the cost of some specs, and we see some key differences, but not necessarily any deal-breaking differences. We’ve already touched a bit on the camera setup, and the differences between the S10e camera and the S10 and S10+ cameras. While the S10e may be missing the telephoto on the back, it still sports a capable rear-facing camera with the ultra-wide, and wide-angle lenses. Similar to the S10, the S10e also has Scene Optimizer and Flaw Detection, both of which should help the user capture better images.

With the “e” model being the new addition in the S10 family this year — we suspect those looking to move up to the S10e will be coming from a device outside the Samsung family, or perhaps from an older model in the Galaxy family. But whichever phone you are upgrading from — Swappa has you covered in terms of buying and selling. You can sell your current device here in the Swappa marketplace and then use those funds to purchase your newish Galaxy S10e.