The Samsung Galaxy S10+ was introduced in February 2019 at the Galaxy Unpacked event. The Galaxy S10+ is one of a few devices that were announced as part of the Galaxy S10 family, and it is likely the model to choose if you want something in the Galaxy S10 lineup and you are looking for the biggest display available.

The Galaxy S10+ began shipping in March 2019, which was a few weeks after the initial announcement. Samsung released the Galaxy S10+ with Android 9 Pie and version 1.1 of the Samsung One UI and made the Android 10 and One UI v2.0 update available in November 2019.

The Galaxy S10 series, as the 10 in the name suggests, serves as the 10th anniversary of the Galaxy S line. The Galaxy S10+, in particular, arrived with a solid list of specs including a 6.4-inch Quad HD display, up to 1 TB of internal storage, and a five-camera arrangement between the front and read. It also has a starting price point of $999.99.

As far as the colors go — you can expect the same four colors we’ve seen with the Galaxy S10 and the Galaxy S10e, as well as two additional colors. The Galaxy S10+ is available in Prism White, Prism Black, Prism Blue, Flamingo Pink, Ceramic White, and Ceramic Black. 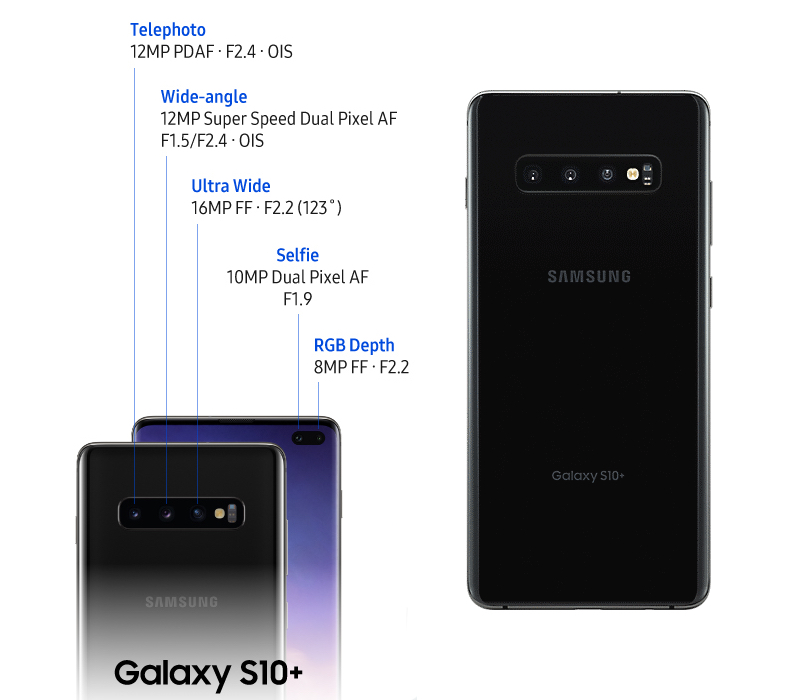 Samsung also has several software-related camera features, such as Shot Suggestion and Flaw Detection, which should both help to ensure the user captures better images. You will also find an Advanced Scene Optimizer, which Samsung has said will help to optimize color according to the subject.

Along with the features for images, you’ll also find some perks in terms of video. For example, the rear-facing camera can capture HDR+ video, which can be viewed on the S10+ display that offers an HDR10+ viewing experience. Another video feature is video stabilization on the rear-facing camera through a feature Super Steady.

Internal storage options also increased with quite a bit more being available on the Galaxy S10+. The Galaxy S10+ has options for 128 GB, 512 GB, and 1 TB, while the Galaxy S9+ topped out at 256 GB on the high-end. And, along with the (up to) 1TB of internal storage — you can further boost that by adding up to 512 GB using the microSD card slot.

Of course, some features will carry over from the Galaxy S9+ such as the IP 68 rating, and the USB-C and fast charging. Both the S9+ and the S10+ also have fast wireless charging, however, the Galaxy S10+ increases the wireless charging to version 2.0 and also adds in Wireless PowerShare. The Wireless PowerShare means your Galaxy S10+ can be used to charge other devices such as a watch, headphones, or even another phone.

Samsung opted to drop the iris scanner on the Galaxy S10+. The capacitive fingerprint sensor was also dropped in favor of the new in-display fingerprint reader.

The Galaxy S10+ is available with three different storage options, 128 GB, 512 GB, or 1 TB. Samsung has the handset available unlocked, or in the carrier version, and pricing begins at $999.99 for the 128 GB model and goes up to $1,599.99 for the 1 TB model. The complete pricing breakdown is detailed below: