The Galaxy S10 series, as the 10 in the name suggests, serves as the 10th anniversary of the Galaxy S line. Today we’ll be taking a look at the Galaxy S10, which originally shipped with Android 9 Pie and version 1.1 of the Samsung One UI. The Android 10 (with One UI version 2.0) update began arriving for the U.S. carrier models of the Galaxy S10 in December  2019.

Samsung is offering four different color options for the Galaxy S10. The device can be found in; Prism White, Prism Black, Prism Blue, or Flamingo Pink. 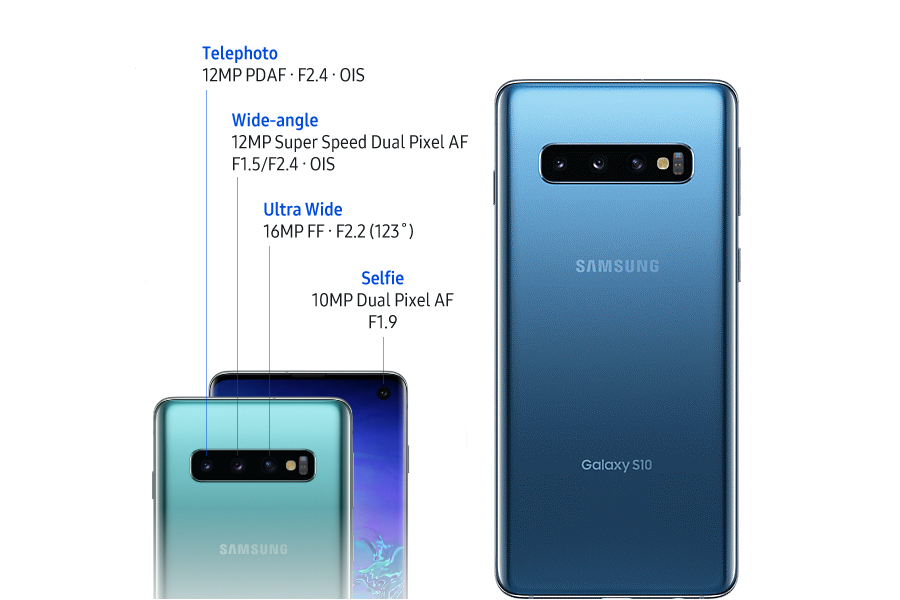 Samsung is touting the Galaxy S10 as having a “pro-grade camera that sees what you see.” While that may sound like fancy marketing speak, the camera setup on the S10 is one of the main updates as compared to the S9. The Galaxy S9 had a single rear-facing camera and a single front-facing camera. Samsung added two additional cameras on the rear of the S10, making for a total of three. And, those two extra cameras include a telephoto and ultra-wide.

Samsung added an Advanced Scene Optimizer on the Galaxy S10, which will optimize color according to your subject. Along with a display that offers an HDR10+ viewing experience, the rear-facing camera can capture HDR10+ footage. The rear-facing camera also includes a video stabilization feature called Super Steady. Other perks of the Galaxy S10 camera feature lineup includes Shot Suggestion and Flaw Detection, which should help the user to get better images.

Internal storage also switched up with double the storage capacity on the Galaxy S10. The Galaxy S10 has options for 128 GB or 512 GB, while the Galaxy S9 came with a base option of 64 GB and topped out at 256 GB on the high-end.

The internal storage, processing power, and battery life all saw improvements coming from the Galaxy S9. But, some features remained the same such as the IP 68 rating, the USB-C, and the fast charging. Both models also have fast wireless charging, however, the Galaxy S10 increases the wireless charging to 2.0 and also adds in Wireless PowerShare. The Wireless PowerShare means your Galaxy S10 will be able to wirelessly charge other devices such as your watch, headphones, or another phone.

The Galaxy S10 also saw a change in terms of device security. Samsung introduced an in-screen fingerprint sensor on the S10, which is a change from the capacitive sensor that was found on the Galaxy S9. The S10 also dropped the iris scanner.

The Samsung Galaxy S10 is available in two storage capacities, a 128 GB model and a 512 GB model. The unlocked SM-G973U1 and the carrier-specific SM-G973U models are both priced the same – $899.99 or $1149.99 depending on the storage capacity. Pricing for each model breaks down as follows:

If you are looking to sell your Galaxy S9 and upgrade to a Galaxy S10 — we have just the place to sell your current phone.